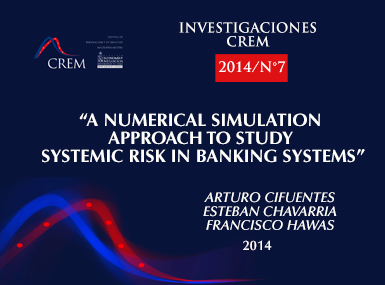 Banking systems are at the center of the financial infrastructure of any country.  It has become apparent after the subprime crisis that such systems cannot be studied by looking at their components individually (that is, in isolation).  Thus, an integrated approach is needed.

In this paper we introduce a numerically friendly, yet general, algorithm that allows us to represent a banking system in a realistic way.  We start with a detailed description of the banks’ balance sheets and we incorporate two different features to account for connectivity effects: interbank loans and correlated-exposures to a common universe of credit-risk loans.  The driving force behind the model is the progressive deterioration of the loan portfolios to which the banks are exposed.  This method is useful to identify the weaknesses of a given banking system, and it is also helpful to assess the merits of different potential responses from the regulator’s viewpoint.  An example based on the banking system of a Latin American country is used to demonstrate the merits of this approach.

Some of our findings are in agreement with those of previous authors, namely, that the probability of developing cascades is proportional to the degree of connectivity of the banking networks, and that the maximum resilience for a given set on banks is achieved for some “intermediate” (optimal?) level of connectivity.  However, we also find–in contrast with a few earlier researchers–that investigating the features of a banking system by collapsing banks individually (and keeping other features unaltered) can give a misleading view of the system resilience.